This was a fun little project that tested the limits of my both my brain and my 3D printer.

After researching some vault doors, I set to work creating the door in Blender (3D software). This door is basically three parts that were printed all at once — the hinge, the door, and the circular frame. I’m pretty proud of myself for the hinge, because I designed it to be printed in place, meaning the pivot points and their holes were printed in place – you would need to break the pins to remove the door from the hinge. Hmmm… maybe that would be a fun idea for a diorama.

This particular print was the first full-size one, and it took almost 14 hours to print. I had to do some cutting and shaving of the plastic to get the door out of the frame, and a few of the supports were a little messy, so I thought that it only made sense to distress it even more with some paint.

Rather than a shiny bank vault, this is now a long-neglected vault from a forgotten military facility deep in the center of the earth. Who knows what you will find inside!

I’ve already got the printer running off another print with a few modifications to ensure a smoother finish, while this old rust bucket is off to eBay! 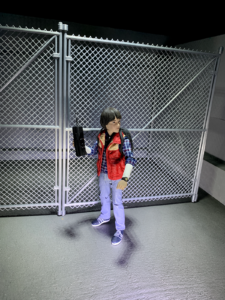